Alice Parr writes: Thought it’d be good to get a blog post up for Tough Mudder given the amount of students and clinicians that donated!!…

We did it!! We both agreed it was the hardest thing we’ve ever done and will probably ever do! The course ended up as a 12 mile mud bath, we knew it was going to be muddy but we were up to ankles in the stuff the entire time. It was also much hillier than we were expecting with barely any flat sections, the total vertical gain was 2539 ft, which is as high as some of the mountains in the Lake District!

As for the obstacles we both agreed the ice bath was the hardest as it completely paralyses mind and body, although jumping the 12ft into mud was pretty hard to commit to too. We racked up a number of electrocutions too along the way which were extremely painful and immobilising! Other obstacles included climbing big heights, ropes, monkey bars, tunneling through pipes with and without water, sprinting and pulling yourself up a enormous half-pipe and many more.

Having said all this we enjoyed it all (perhaps minus the split second electrocutions) and would recommend it to anyone that wants a challenge. We’ve raised £1250.36 for The Ben Walton Trust which is more than we ever thought we could get! Thank you to everyone that donated!

Here are some before and after photos from us and we hope to be in some of the professional ones taken during the course. 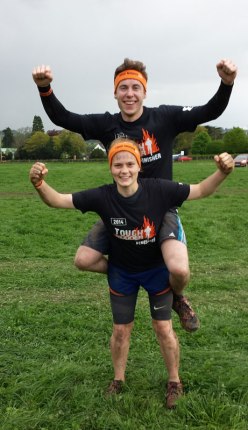