Kick off saw the staff team make a promising start, putting immediate pressure on the student defense. However the solid student back four (consisting of Rishi Patel, Chris Beech, Dave Jackson and Oli Milton) managed to repel an early onslaught, but the staff were awarded a penalty when an ‘enthusiastic’ challenge came in on one of the staff players. The staff captain, Richard Thomas-Robinson, calmly stepped up and slotted the penalty past William Johnston, the student keeper, making it 1-0. 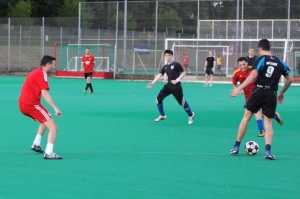 This rallied the students and they mustered a counter attack. Some classy link up play between Toni Daci and James Wellick saw a header fly into the back of the net from Sandro Jose Fontanini. The match was all square at 1-1.

As the game came towards half time, the staff crossed the ball into the box and after a goal mouth scramble, they managed to squeeze the ball past the keeper into the back of the net. The predominantly student based crowd fell silent as the half time whistle blew. The staff went in to the break the much happier of the two teams, leading 2-1.

The second half saw the students come out all guns blazing, in an attempt to try level the scores. The staff were on the back foot at the start of the second half, but managed to regain control of the ball and the game. As the match drew to a close and the students pushed forward more, an abundance of chances came to the staff to close out the game, but some superb defending from Alex Tsang, Doug Macmillan and Will Mckemey kept the students hopes of a salvaging a draw alive.

Controversy occurred in the dying moments of the game as Jack Livesy put Sandro through on goal, but a hand was allegedly flung in the way of the ball from a staff defender to stop Sandro having a clear shot on goal. The referree disagreed with the students claims however and a few minutes later, the full time whistle blew and the staff celebrated their triumph over the students.

Congratulations to the staff team who fully deserved their victory in an ever competitive and enthralling game of football. The students will look to level the scores when the Staff v Student Cricket Match takes places on the 22nd June.