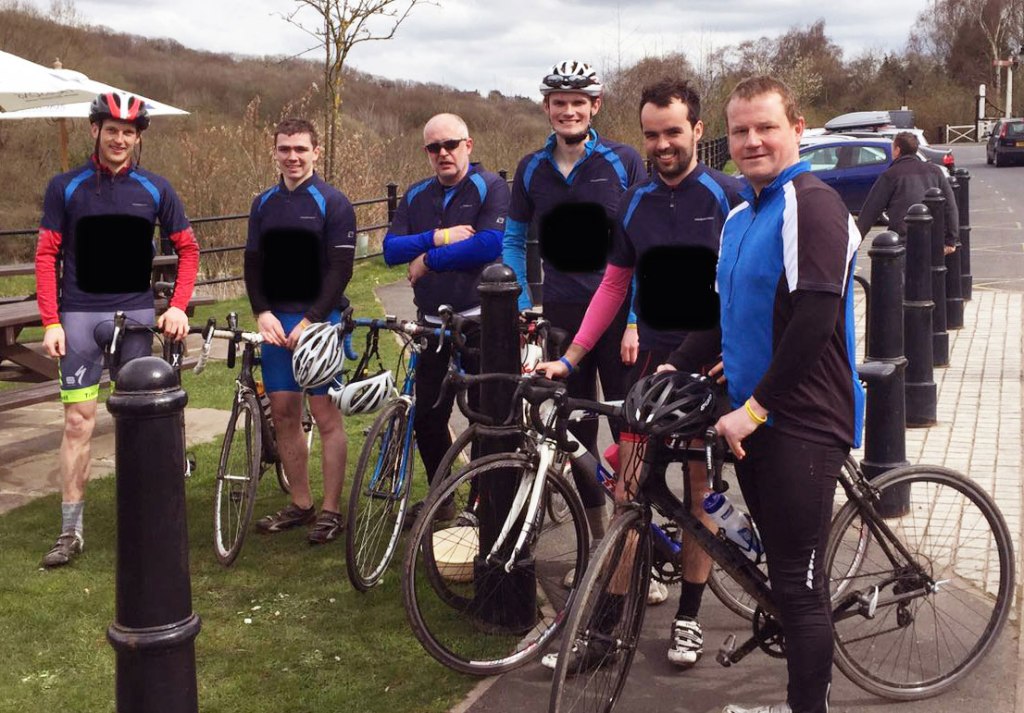 Chris Beech (C.Gull), Jack Livesey (Grit Box), Will Madden (Virg), Richard Aykroyd (Dick), Nick Adams (Ladams) had a planned early start from The Black Swan in Coalport to take part in the mixed off road/on road 92 km ride around East Shropshire (Ladams territory). Prof Dietrich turned up unplanned (and unlabelled) on his lightweight road bike with slik tyres. Shortly after the start we rode past the Ironbridge. Taking Team Sky’s principle of “Aggregation of marginal gains” to the extreme in an attempt to reduce weight, Prof claimed to have forgotten his crash hat.  Next up, the most onerous task of the day: transportation of the Endobelly up the climb of the Severn Gorge.  Not easy …. but if Abraham Darby could get heavy weights up the Gorge, then so could we. We regrouped at the pub in Little Wenlock,  disappointed it was shut at 9.15 in the morning. Ed, Nick Adams’ son joined us shortly after. Again using the “aggregation of marginal gains”, Ed increased the weight Prof had to carry, useful for the off road sections and also affording protection to the professorial bonce. We passes another local sight, the Roman Vineyard, sadly non productive. We were soon onto the first off road section – here, the extra weight, downforce and traction afforded by the Ladams fat tyres and midriff came in incredibly useful allowing good progress in a straight line  ….. unlike those on light bikes and thin tyres….  On rejoining the road we were treated to the amusing sight of Ed on the front of the group burning his Dad off – needless to say the rest of us kept up. We regrouped at Newport – lost…. the penalty for leaving the local knowledge behind. However, Ladams local knowledge got us back on track and there followed a mix of undulating road and flattish off road riding.  The off road sections were interesting as someone, who is not English, was making rather a lot of well known English phrases as the lighter bikes were going in all directions on the mud, including perpendicular to the desired line of travel. Off road, fat tyres, fat midriff: no probs. Near misses ensued but crashes avoided – just. Only one of us fell off (but we won’t say who)

Prof, as yet unlabelled, and aided by the C. Gull was keen to keep the pace up on the road. Some of us weren’t quite so keen to see “Panzer Wagen” hammering away at the front.. Will and Jack were having their own King of the Mountains battle on the climbs, whilst Nick and Richard watched all this from the back.

We arrived in Bridgnorth with 8 miles to go. There was a big debate as to the correct route onto the track bed of the old Severn Valley railway line back to the pub in Coalport. Gritbox was nearly murdered and put in the same for correctly pointing out we had 1 climb to go.  So, finally onto the old railway, which is not the smoothest path we have ever ridden on. Panzer Wagen, on his upright carbon road bike, felt every jolt of the tracks (pun intended), but off road, fat tyres, fat midriff …. no probs  We arrived back in Coalport to beer and chips provided by the Black Swan, and watched the last 30km of Paris Roubaix in the pub. Special mention goes to Richard who completed the ride recovering from illness.

Anyone for next year ? 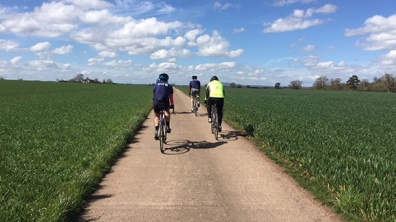