Mohammed-Jaffer Ismail spent his summer dental elective in Greece and we asked him to provide an article for the blog?  Jaffer was working with the charity, Health Point Foundation, who are looking for support and volunteers throughout the year to give assistance to the refugees. Here is Jaffer’s account

——
Getting out of the air-conditioned taxi at Diavata refugee camp, I caught my first glimpse of a Greek refugee camp. I remember immediately seeing clusters of white tents with the words UNHCR inscribed on them for the first time. It was a sight that I remember seeing on news reports about refugee camps in what, from the comfort of my home, seemed like far-flung abstract places around the world. It was then that I realised the reality of the situation: being in a refugee camp within Europe and only a short 3-hour flight away from home. Diavata, an ex-military barracks, is approximately 10km away from Thessaloniki, the second largest city in Greece. Ahead, in the distance, was a wall with a mural with the words “only love” and “save Aleppo”- the city which has come to symbolise the crisis in Syria.

The vast majority of refugees in the camps are Syrians. They are attempting to seek safety from the war and destruction that has plagued their homeland for the past five years. In doing so, they are a part of the biggest refugee crisis since the Second World War, creating an unprecedented challenge for the continent. The perilous 4-mile sea crossing from Turkey into Greece has become part of the established Eastern Mediterranean migration route, placing Greece as one of the nations at the heart of the crisis. In March 2016, the EU and Turkey negotiated a deal that saw any refugees and migrants crossing the Aegean Sea into Greece being sent back to Turkey. For every Syrian refugee readmitted into Turkey, the EU would agree to resettle another from camps within Turkey. This deal, along with Macedonia’s closure of its border with Greece, resulted in tens of thousands of refugees and migrants being stranded within Greece. Many of these refugees are in temporary camps in the North of the country. Health Point Foundation (HPF), a non-profit organisation, operates within the refugee camps in Northern Greece. The charity focuses on providing much-needed dental aid to refugees and is currently the sole provider of emergency dental care within the camps. During the summer of 2016, I had the privilege of volunteering with HPF as part of my university elective project.

The charity’s base was at Diavata camp. At the time, HPF were operating from a metal shipping container with 2 massage chairs acting as dental units next to each other at one end (HPF has since moved into a larger purpose built clinic in Diavata). The heat when first entering the container was intense, as the metal walls would radiate heat from every side. Thankfully, there was a single air conditioning unit at one end providing some respite. As we walked towards the container, an elderly man approached me speaking Arabic. Not understanding Arabic, I had no clue what he was asking but it was clear it had something to do with pain from his teeth- already, within minutes of arriving, the demand for dental care was presenting itself, foreshadowing the rest of my experiences in Greece.

The first day was to be spent on outreach at another camp, Nea Kavala. After organising the autoclaved instruments and packing all the equipment we thought we would need (plus more!) we made the one-hour drive through the picturesque Greek countryside to the huge sprawling camp. We were led to our tent for the day – a blank canvas with a rocky ground that we had to convert into a functioning dental clinic. With no AC units but rather fans blowing hot air, we got to work. After ensuring we had established clear clean and dirty zones, organising all the equipment to maximise efficiency, and attempting to get the mobile dental unit to function, we were ready to start seeing the first patients. 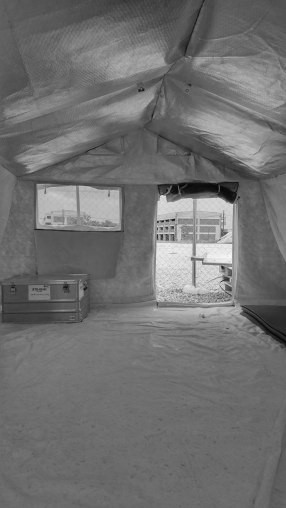 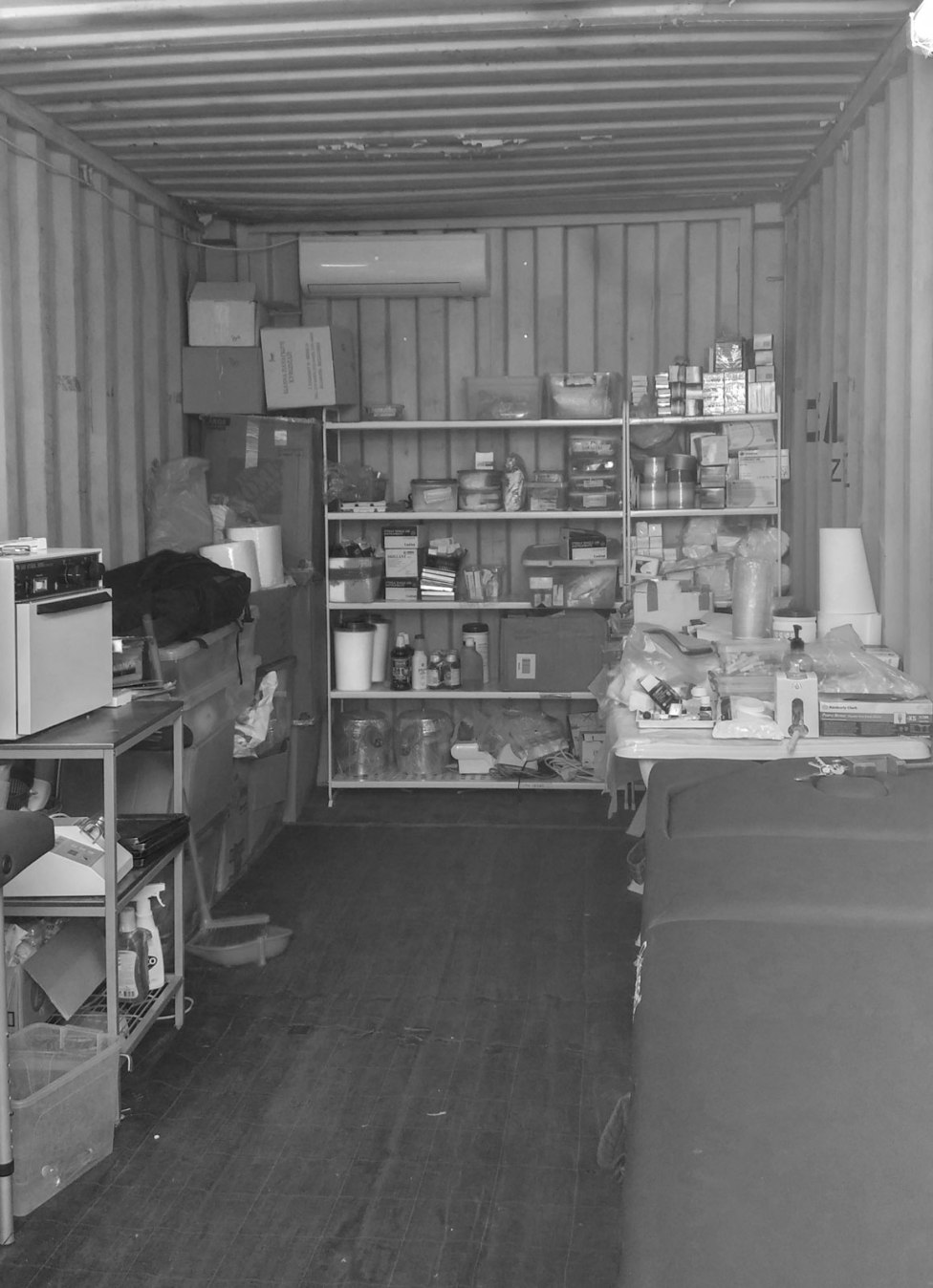 Registering the first patients in line using a ticketing system, it was clear that language was going to be an obstacle. Whilst registering the details of those waiting, I was able to talk to some of the refugees about their experiences. One man brought his 6-year-old daughter who he said was in pain and unable to sleep at night. I distinctly remember her vacant expression as she stood waiting, staring into the distance- a girl her age must only have lived through war and conflict. Her father explained to me a story that would become a common tale during my time in Greece: he had paid 700 Euros per person in his family to the people smugglers in Turkey. Expecting a boat to cross the waters, they found a rubber dingy instead – overcrowded and dangerous. Another woman, a teacher in Syria, explained that her family had hid in an empty oil tanker in Syria to reach the Turkish border, followed by the perilous sea crossing. It was clear that many had spent their life savings to make this journey into Europe, not expecting to be held up in refugee camps where, as we would later see, they would have to queue daily for their water rations.

During the day, a doctor from the Finnish Red Cross, operating in a nearby facility, entered the clinic. She expressed her relief at seeing a dental team as many people she saw in the camps were suffering severely from dental pain and there was very little they were able to do for them. Having worked in conflict zones such as Afghanistan and Iraq, she explained that the refugee camps in Greece were one of the most challenging environments she has worked in. Many of the people were relatively physically well, however they required significant psychosocial support which was proving a major challenge to obtain.

Many of those we saw, however, held onto the hope that they would be leaving imminently for countries such as Germany and Sweden. When offered treatment involving extractions, some would be extremely hesitant, saying they would wait until they got to Germany as they would be there soon. It was hard to imagine at the time how soon that would be. Most patients presented in pain- it became clear that when it came to clinical decision-making, the focus of the dentists throughout was on pragmatic and reliable treatment options as the priority. Rapid (almost immediate) setting of glass ionomer cements due to the heat did not make matters any easier! Whilst untreated caries and dental infections were common, many of the refugees had clearly spent time and effort on their teeth in the past – bridge and crown work was fairly common to see, and many had an awareness of the importance of oral hygiene.

As the first dental team left, another team arrived. Again, several outreach clinic visits were planned with a similar setup- arriving at each location to set up a 2-dentist clinic in an empty tent or, in some cases, empty small rooms which were a part of an abandoned factory or military barracks. The demand for care became more evident as we began to visit camps that HPF would see fortnightly as opposed to weekly. Registering patients and attempting to triage was part of my focus on these busy days. Having picked up a few Arabic phrases (unable to understand many of the replies, however!) my task became somewhat easier. However, on occasions, many displayed frustration due to waiting long periods of time, a reflection of the demand. Unfortunately, on some of the days we were unable to see all the patients and had to employ a priority system of treating those with large diffuse swellings and children in pain as the clinic ended and sterile supplies ran low. Turning people away at this point was extremely difficult, however providing safe care was the ultimate priority. Seeing the demand for care underlined to me the debilitating nature of dental pain. Indeed, some patients I saw had opted to leave their appointments at the Red Cross tents in order to see the dentist due to the extreme discomfort they were in.

One major hurdle faced throughout the experience was the language barrier and limited availability of translators. In order to ensure that informed voluntary consent was given, it was crucial that the dentists were able to communicate effectively with the patients. Thankfully, we would come across some refugees able to speak excellent English and they would be all too happy to assist in translating. At one point, a somewhat complicated translation system was set up from Kurdish to Arabic, followed by Arabic to English! Access to Whatsapp also proved invaluable, as HPF had set up during the week a translation group where requests could be messaged followed by prompt phone calls from volunteers across the globe. Clearly all these workarounds present challenges and are not as effective as someone on the ground; however, they served as a helpful backup. Moreover, some of the team at the end of the week had picked up enough phrases that would surely qualify them for a new diploma in Dental Arabic!

Throughout the trip, the determination and willpower of the dentists, nurses and other volunteers working in the extremely difficult conditions could not be doubted. When it came to the patients, the work of the dental team symbolised the phrase we are all used to: putting patients’ interests first. Working hours on end with only a few minutes’ break during the day, and with such limited equipment and facilities, their resolve was truly inspirational.

Leaving Greece, on the flight back, I couldn’t help but think of the individuals I met during my time in the camps. The experience in Greece highlighted to me how desensitised I had become to watching world events unfold on TV from the comfort of my living room. By being on the ground in the refugee camps, where sanitation and amenities are often poor, and interacting with people who have been through traumatic events, the refugee crisis suddenly became a more ‘real’ event to me. My attention turned in particular to one patient we saw a few days earlier: after he sat down, he promptly self-diagnosed himself as having ‘mesial caries’- it rapidly became clear he was a first-year dental student from Syria, fleeing the conflict. He explained his decision to leave Syria was based on the choice he had if he remained: “kill, or be killed.” It was only then, as I was flying back home, that it struck me – had fate placed me 3000 miles away in the other direction, it could have been me sleeping in a tent that night. 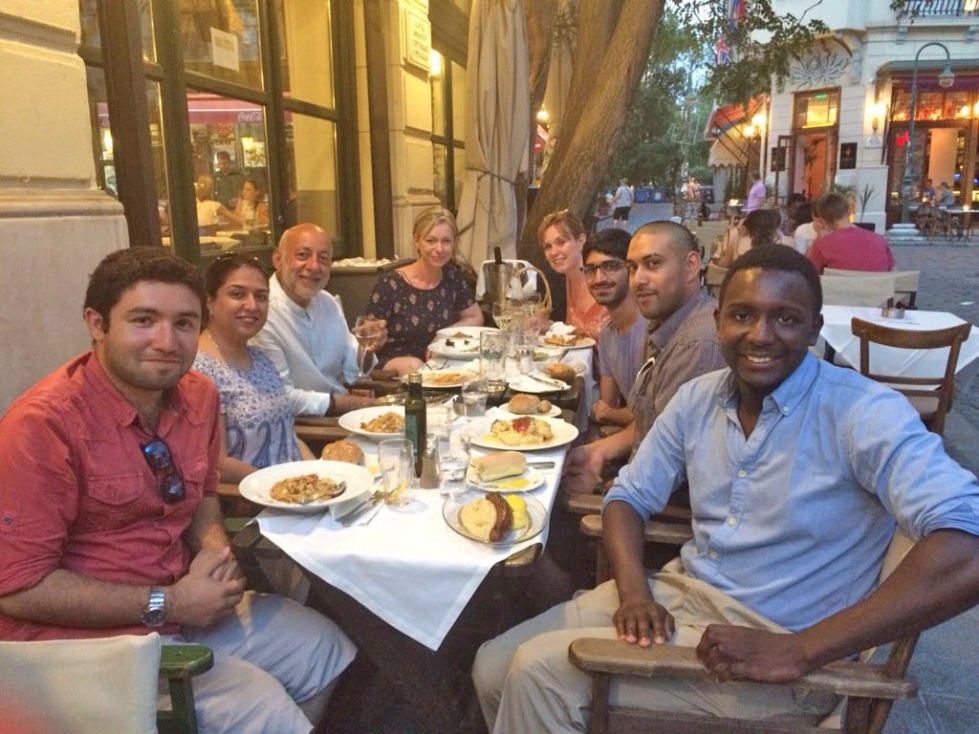 A special mention for the volunteers below who were present during the period of my elective:

In particular, a special mention to Dr Ola Hassan who is the dental lead at Health Point Foundation, putting in tremendous effort to ensure the charity is able to provide the much-needed care. For more information see http://healthpointfoundation.org or visit their Facebook page at https://www.facebook.com/healthpointfoundation/